For full house contents probate or confirmation valuation call us or email us to discuss your needs. 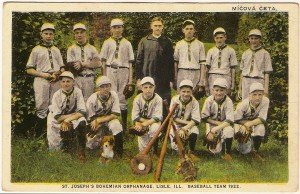 For all their drama and glory, postcards were never a major advertising medium for the sports world. However, those that did emerge from the past century were often significant and striking.

Ultimately, major league baseball probably made the best use of promotional postcards directly to encourage attendance at ball parks and to endear individual players to the fans. From time to time, various commercial firms including beer distributors and candy manufacturers made use of baseball related postcards. Eventually, they were used to advertise automobiles, bars, motels, and restaurants .

In 1869, the Cincinnati Red Stockings became the first team to play professional baseball. Owners began hiring men to play full time and tour the country to play against amateur teams in various cities. Depending upon which reference is consulted, the Cincinnati team either won every game they played on the tour or lost only one game. At any rate, by the 1870s, there were several professional teams operating in the country and baseball was on the way to becoming the national pastime.

By the 1880s, baseball players were being featured on trade cards which were given as premiums for the purchase of tobacco, and later for the purchase of candy. Meanwhile, more and more colleges had joined the universities of Harvard and Yale in the University Athletic Club which had established basic rules for the playing of football.

Elsewhere during the 1880s, professional boxing was also becoming more organized. John J. Sullivan was declared world champion in 1882 and held the title until 1892 when he was defeated in the first heavyweight championship bout to be fought with gloves and under the Marquess of Queensbury rules . The new champion was James Corbett who was ultimately defeated in 1897 by Bob “Ruby Robert” Fitzsimmons. Fitzsimmons gained the victory with “a blow to the solar plexus” and the term became part of the lexicon of sports. Eventually, all of the early boxing champions would be featured on sports postcards.

Early in the 20th century, postcards became a major form of written communication and gradually they became a promotional tool of baseball and other major sports.

“As postcards became more and more common and less expensive to produce, baseball clubs seized at them,” notes Ron Menchine in Tuff Stuff’s Baseball Postcard Collection. The New York Giants had a baseball team postcard as early as 1903, and individual Giant players were being immortalized on promotional postcards by 1905. (In 1994,Leland’s auction sold a set which included 19 of the 20-card set for nearly $3,000 .)

The Cincinnati Reds, not to be out done, issued postcards around 1908 with their individual players depicted in color. Among the distinguished players was Miller Huggins, who some (including author Menchine) suggest may have been one of the first baseball players ever to appear on a full-color postcard. In 1910, baseball’s Hall of Fame players were featured on sepia postcards. Such cards including player Sam Crawford are considered rare but still turn up from time to time at leading auction houses and in otherwise obscure accumulations of postcards.

In 1919, fans were treated to a Cincinnati Reds World Series postcard. On the front were the team’s powers in individual “thumbprint” images. One well-worn example appeared in recent years in a Leland’s auction with the hand-written message on the reverse, “Here’s the boys that are putting the Kibosh on the White Sox.”

That same year professional boxing made headlines, too, with one of the greatest matches in the sport’s history. Jack Dempsey’s dramatic knockout of Jess Willard was stunningly captured by poster artist James Montgomery Flagg (famed for WWI’s “Uncle Sam Wants You” poster). Dempsey went on to reproduce the image on postcards distributed at his famed New York City restaurant . On the reverse, Dempsey urged visitors to dine “where food and friendliness are knockouts.” Baseball’s “knockout” in the 1920s was the legendary Babe Ruth. Ruth’s home run bat was worth millions at the box office; thus the newly constructed Yankee Stadium became known as “the House that Ruth built” when it was completed in 1923. Early Yankee Stadium postcards claimed the facility would hold 80,000 fans, however, a newspaper account of opening day at the park said more than 20,000 fans were turned away after 74,000 were admitted.

Several versions of Yankee Stadium postcards were published during the glory years of the 1920s, most of them are considered highly collectable today.

Postcards with teams and individual players from that era still surface on occasion in the marketplace. In recent years Leland’s auctioned a set of real photo postcards which depicted individual members of the Exter Baseball Team. Indications are that a set was presented to the team captain upon his departure for Harvard University in 1934.

As the 1930s decade moved into the 1940s, baseball fans had something else to cheer about at Yankee Stadium, a player named Joe DiMaggio. Fondly known as the Yankee Clipper, DiMaggio hit safely in 56 consecutive games in 1941 for a major league record. During the 1940s and very early 1950s, DiMaggio hammered out a lifetime batting average of .325, and along with brothers Dom and Vince, put some of his money into a restaurant on Fisherman’s Wharf in San Francisco, California. The t h ree had grown up in the area and all had become professional baseball players. Postcards colorfully promoting the DiMaggio restaurant were once widely distributed, but are highly prized by collectors today.

Throughout the middle third of the 20th century, postcards also paid tribute to and promoted dog racing tracks, horse racing tracks, bullfights (in Mexico), golf courses, Olympic sites, and places like the Indianapolis Motor Speedway. As a general rule, they were short lived and the majority were either mailed or discarded. Today, a great number of surviving examples are being gathered up with renewed affection by collectors.

The following are examples of sports-related postcards in very good to excellent condition as gathered from the marketplace of auctions, shops, antique malls, and elsewhere.

I had to come over to the UK to get my late fathers affairs in order after he recently passed away. As well as completing the probate valuation I T G Probate Valuation also arranged the clearance of the house for us at a later date. They were ace and went above and beyond the call of duty. Great genuine bunch of guys!