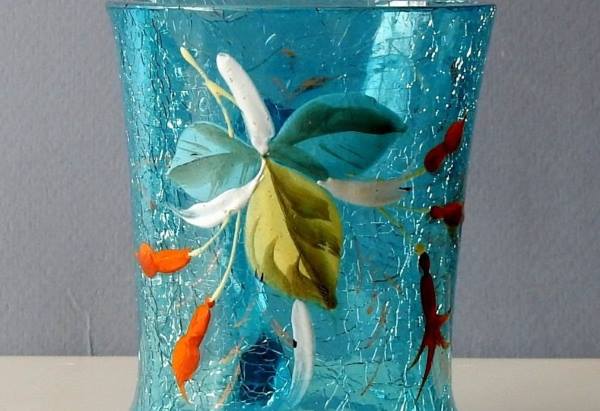 Crackle glass is a type of glassware made with a process that produces glass that looks frosted, or full of tiny cracks. It goes under various names including ice glass craquelle, and frosted ware, but the most common names used by collectors and dealers in the UK are ice glass or crackle glass. In the USA it’s usually called overshot glass, in France it’s known as verre craquelé, and Italians call it vetro a ghiaccio.

Crackle glass is believed to have originated during the Renaissance in 16th-century Venice, where many glassmaking workshops were already established. A lump of molten glass, known as a ‘gather’, would be collected from the furnace on a tubular piece of metal and blown. It was then dipped in cold water while still hot, causing many minute, random cracks to appear, giving a frosted appearance. The glass was then reheated to complete the process.

You’re unlikely to see pieces of crackle glassware from the 16th or 17th centuries except in a museum, and most serious collectors look for crackle glass pieces from the second half of the 19th century and the early 20th century. By that period, makers had perfected techniques to add colours to pieces. Many types of glassware were produced, such as vases, jugs, plates and perfume bottles.

New, and cheaper, methods of crackle glass production appeared in the later 19th century, making it more affordable to a wider public. One new method was patented in England in 1883. This involved creating an effect on glass objects by sandblasting them or applying acids. The pieces were then covered in a layer of glue and heated so that the glue cracked off, taking small pieces of glass with it to give the frosted effect.

Highly regarded crackle glass makers in England included Ashley Pellat at the Falcon Glassworks in London and George Bacchus & Sons in Birmingham. Both companies produced crackle glass from the mid-19th century onwards. In France, Eugène Rousseau produced some exquisite pieces in the second half of the 19th century, while René Lalique made highly collectable pieces in the first part of the 20th century.

I had to come over to the UK to get my late fathers affairs in order after he recently passed away. As well as completing the probate valuation I T G Probate Valuation also arranged the clearance of the house for us at a later date. They were ace and went above and beyond the call of duty. Great genuine bunch of guys!